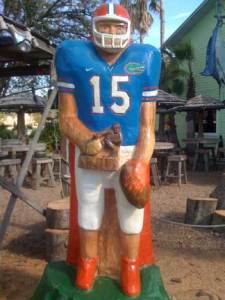 Treebow, as the wood sculpture was called, wore Tim Tebow's #15.

The University of Florida’s University Athletic Association is out to tackle anyone who is making money — or could be benefitting — from the use of Tim Tebow’s recognition as #15 of the Gator football team.

The UAA always has been vigilant in protecting “the” Gator logo, UF brand lettering, etc. On game day, officials patrol the areas near campus to make sure no unsanctioned T-shirts or other Gator gear are being sold.

Today’s Gainesville Sun carried a front page story “Profitting off the Gators: A fine line between what’s OK and what’s not.” I was particularly interested in the story, as we talk about legal and ethical issues related to advertising and marketing in the undergraduate communiations course I teach. I’m always looking for examples to use in class that the class will find interesting and relevant. This definitely helps make sometimes abstract concepts like trademark and licensing agreements have more concrete. In this case, not carved in stone but in wood.

Treebow is one of UF’s targets. UF sent a cease-and-desist letter to Ballyhoo Grill, a local eatery that had this wood sculpture outside the restaurant. I had taken a photo of Treebow last spring.

Thank goodness I had, as Treebow has been surgically (or whatever the term would be to make alternations with woodworking tools) modified.

So in my driving today, I took a side trip to Ballyhoo Grill. And there was the modified Treebow — now #7. As #7 with a Heisman Trophey, this is now Danny Wuerffel, who was quarterback for the Gators from 1993-1996 and won the Heisman Trophy in 1996.

I’m a fan on Danny’s, as he was a terrific player and an excellent role model — as Tim Tebow is now. Danny was a public relations major in the College of Journalism and Communications, so I was fortunate to get to meet him in the classroom when he took Writing for Mass Communication.

So, I have mixed thoughts about UF’s efforts to save #15 for their own marketing efforts. But I’m pleased we can celebrate Danny Wuerffel’s contributions to UF’s athletic program.