The guest speakers in yesterday’s class were to help the students get ready to write a story about the H1N1 flu. 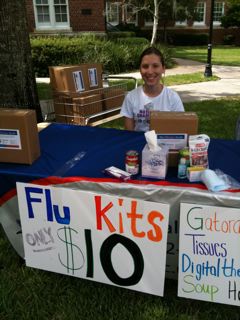 Flu Kits are on sale on the University of Florida campus. The kit includes a thermometer, soup, hand sanitizer and tissues.

I provided the expert sources for the story — Dr. Guy Nicolette, chief of staff at the University of Florida’s Student Health Care Center (SHCC), and Paul Myers, assistant director of the Alachua County Health Department.

After our in-lecture interview, the students were to determine an angle on the story and then do their own reporting — interviewing at least two “average” people who could be sources for the story about the flu.

Every semester, I select a story topic for a group reporting initiative and invite guest speakers to help the students learn about the topic and to learn about interviewing.

I often select a topic that I think will have personal relevance to the students beyond the experience of writing the story.

Certainly the H1N1 flu falls into that category.

Dr. Nicolette and Mr. Myers talked about strategies for avoiding getting the flu — getting vaccinated, using cough and sneeze etiquette (coughing or sneezing into a tissue and disposing of the tissue or sneezing into one’s sleeve), and washing hands frequently.

They talked about what is different about this flu — It is active year-round versus the typical seasonal (November to March in Florida) flu. It has more impact on age groups typically not as affected by the flu, healthy young people.

Some of the headlines for me: 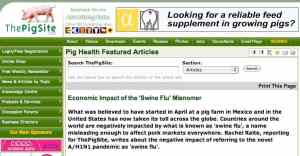 – The debate over what to call this flu. Dr. Nicolette advocated saying “influenza” so as to distinguish between this respiratory flu versus gastro-intestinal flu.

The State of Florida Department of Health has decided to use H1N1 swine flu. Using “swine” in the name has caused confusion and some unwarranted concern about the safety of eating pork.

– Students don’t own thermometers. Dr. Nicolette said he was taken aback in how few students he had dealt with at the SHCC knew if they had a temperature because they didn’t have a thermometer. We did note that The Florida Flu Kit does include a digital thermometer. (See photo of the Flu Kit display.)

– As 99 percent of all the flu cases that were being tested in the county were found to be H1N1, UF and the county health department have stopped that testing. The assumption now is that the current cases are H1N1.

– If you think you have influenza, you don’t need to seek medical attention in most cases. You can obtain information at a number of online health sites including’s UF’s Student Health Care Center.

← University of Florida sells The Florida Flu Kit
We were ready to try out Mediasite, but Mediasite wasn’t ready for us →