When tornadoes hit Tuscaloosa: How ‘new media’ impacts the way we learn about and experience news events

The morning after the tornadoes hit Tuscaloosa, my college email was filled with news updates of how the tornadoes had impacted colleagues and former students at the University of Alabama. One colleague sent a link to a video that a friend’s son shot from a building on the University of Alabama campus. That video — complete with the son’s breathing in the background — captures the power and terror of a tornado (and had more than 8,000 views in just five days). 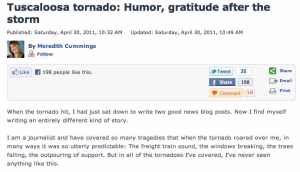 Fortunately, no one in the U of Alabama group I know was injured. Most had little or minimal damage to their homes. But one U of Alabama colleague, Meredith Cummings, is one of the true survivors of the tornadoes. She was at home at the time the tornado hit, covered her 8-year-old daughter with her body, and they lived. Their house was destroyed. The car was destroyed. They left the ruins of their home without even a toothbrush.

Within just two days, Meredith was blogging about how being in the tornado compared to her experience of being a reporter covering tornadoes. And she was counting her blessings.

Her blog was posted in al.com, the online site of The Birmingham News, The Huntsville Times and Mobile’s Press-Register, and had been shared by more than 200 people through Facebook and Twitter. The comments in response to her post reflected that people appreciated her positive spirit and humor in the midst of a disaster.

Email, blogs, comments on blogs, Facebook, Twitter, video shot and posted by individuals who are on site during a news event. All of these are ways that new media is supplementing and, in some cases, replacing the traditional media’s coverage of a big event and a way that we can personalize our news coverage and have a more personal view of news events.