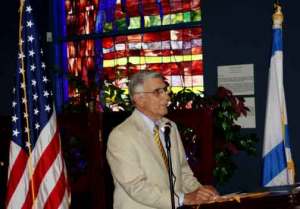 Ralph Lowenstein was honored at the University of Florida Hillel in recognition of his receiving the Emma Lazarus Statue of Liberty Award. Photo by Julie Dodd

Ralph Lowenstein was honored by a reception at the UF Hillel last week for receiving the Emma Lazarus Statue of Liberty Award. He received that award at a banquet in New York City, emceed by Dan Rather. (See the program for the dinner.)

In 1948, Ralph volunteered for the Israeli army as an sophomore at Columbia University.

He has spent 28 years collecting and building the Aliyah Ber and Machal Archives to record the experience of North American volunteers who served in the Israeli War of Independence. A number of UF students have had a great history lesson as well as training in research by working with Ralph on the project.

He is the dean emeritus of the UF College of Journalism and Communications and continues to be an inspirational leader for those of us who were on faculty when he was dean.