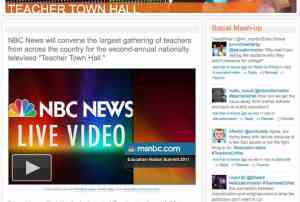 All of those topics plus Melinda Gates’ perspective from the Bill & Melinda Gates Foundation and a stream of thousands of tweets at #TeachersEdnat were part of Teacher Town Hall. 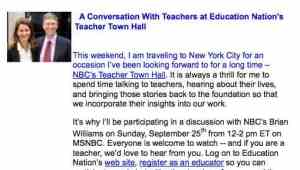 I found out about this two-hour televised program from NBC Education Nation by reading Melinda Gates’ column in The Huffington Post.

The two-hour program, aired on MSNBC, was a whirlwind tour through educational issues.

Brian Williams, anchor of NBC Nightly News, was the moderator. The core of the program was Williams interviewing educators (two at a time) on a specific educational topic, such as preparing students for college, using technology in the classroom, and teacher pay.

He interviewed Melinda Gates about her views on funding education based on the work she is involved with through the Bill & Melinda Gates Foundation.

Periodically, Williams asked for the audience’s response to questions, including “Are school uniforms still an issue?” and “Are you optimistic about the future of education?”  He made some of his own comments – some of which were off target, such as saying the assembled teachers were being passive aggressive when not responding as he wanted to questions he asked.

NBC News’ Chief Education Correspondent Rehema Ellis provided updates from the thousands of tweets sent to #TeachersEdnat. The tweets were shown streaming in on a floor-to-ceiling screen.

[I did follow the Twitter feed both during the program and afterwards and made a couple of tweets myself. I checked the tweets during the numerous commercials.]

MSNBC’s Tamron Hall was on the floor with a microphone, talking with individual teachers, several of whom identified themselves as being teachers of the year from their states or National Board Certified.

After watching the program, I feel somewhat like we’ve taken on a topic like the nation’s eating problems by running through an entire grocery store, quickly pointing out good and bad food selections as we zoom by.

So what’s in my shopping cart as I finished watching the Teacher Town Hall?

What do you think are key issues for improving the educational system?