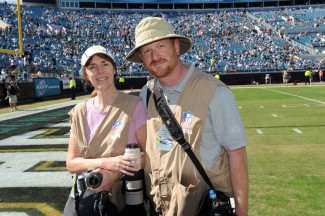 Daron Dean and I were on the sidelines ready for the start of the Jaguars-Lions football game. We were wearing the beige vests that indicated that were photographers, and we also had sidelines passes. Photo by Bob Mack

With the 2018 NFL season getting underway, I’m sharing a post I wrote about photographing the Jaguars-Lions game in 2012 with photographer Daron Dean.

I was on the sidelines of EverBank Field in Jacksonville, getting ready for the start of the Jacksonville Jaguars – Detroit Lions NFL game. I was excited and a little nervous.

I was there thanks to Daron Dean, a former University of Florida student who is the staff photographer for The St. Augustine (Fla.) Record. Daron is an adjunct faculty member in the College of Journalism and Communications this semester, teaching Advanced Photography.

When he and I were talking about teaching, he said he had two press passes to several of the Jaguar games and was going to see if any of his students would like to shoot a game with him.

I’m an enthusiastic photographer but haven’t shot many team sports – and never professional football. But I thought this would be a great learning experience for me. So I asked Daron if I could join him for a game, and he said yes.

The experience of getting ready for the game and shooting the game provided me with several insights as a teacher.

1. The importance of developing your checklist for the game 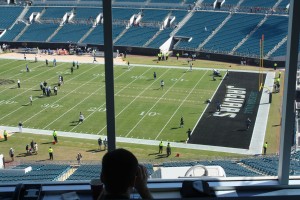 Two hours before the kickoff, Daron Dean and I were in the press box to check out the setup. The photographers’ work rooms are on field level. For this game, the end zones had been painted black, and the Jaguars were wearing black uniforms. Photo by Julie Dodd

In talking about the game, Daron discussed a variety of issues to help me be prepared.

He told me about restrictions of where we could and couldn’t shoot on the field. We had to be behind a yellow-dashed line and couldn’t do any shooting either in front of or behind the team bench.

He made clothing recommendations, including not to wear team colors or logos and to wear lace-on shoes that are solid in case you get stepped on by other photographers or players during and after the game. He recommended I buy kneepads, as we would be shooting while kneeling for much of the game. We needed hats, sunscreen and water.

He explained what our game schedule would be, including what we’d be doing before the game started and during half-time.

2. The need to practice with your equipment 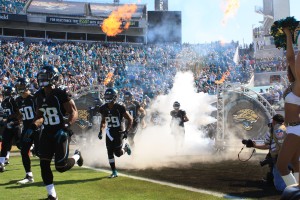 We lined up with the cheerleaders as the Jaguars ran onto the field. Quite the roar of the crowd. Photo by Julie Dodd

Daron encouraged me to shoot sporting events to practice shooting with a big lens.

I had a 75-300mm lens. But for shooting football, I would need to use a 300mm fixed lens that would give me better shooting exposure.

I was able to check out a 300mm lens from the college – a lens that was almost twice as long and twice as heavy as my lens.

I did some weight lifting, as I would be holding the camera for three or four hours for the length of the football game.

Daron critiqued some of my big-lens shooting and offered advice both with those shots and as I translated my shooting experience to the NFL game.

3. The challenge of shooting football games

I had the player with the ball and the context of the play. The shot was in focus, and an NFL official didn’t step in front of me. Success. Photo by Julie Dodd

From the opening kickoff until the end of the game, it was like a game within a game for me. The teams were playing, but my game was to get photos. At a minimum, I needed a player and the ball in the frame and for the photo to be in focus.

Sometimes I had the player in the frame, but when I took the photo, the ball was behind another player. Sometimes one of the officials or the sound technician stepped in front of me just when I had the shot.

Only once or twice did I miss the shot because the play was coming right at me, and I knew I needed to move — quickly. Let me tell you that players running at you sound like a herd of cattle on stampede, and all those loud crunches you hear on TV of tackles are not enhanced.

I didn’t realize I had the Jaguar head in the background until I looked at the photo on my computer. The Jaguar head was OK but you don’t want to have a distracting background. Photo by Julie Dodd

At halftime, Daron and I were in a room in the stadium with photographers from others news organizations. The photographers were downloading their photos and talking about key plays during the game. “Did anyone get that third touchdown?”

If Daron had been shooting for Reuters, he would have been busy writing captions and uploading his photos and captions for transmission.

He had a list of the players and their numbers and positions. A fellow who looked like an intern for the Jaguars distributed a play-by-play listing that provided the time of every play and what the play was. But during this halftime, Daron had time to critique my photos and then have us review his photos. He had many great shots, and I was pleased I had several that would have publication potential.

He was encouraging and offered helpful tips about shooting the second half.

The halftime flew by – which he said it would – and we were back on the sidelines. I did think my shooting got better as the game progressed. I was better able to anticipate the action once a play started.

A challenge with using a 300mm lens is that you have a fixed focus. The lens is great for shooting plays that were about 30 yards away. But if the play was close, that big lens didn’t work. For the first couple of touchdown plays, I tried using the big lens. Then I tried switching from the 300mm to my smaller lens. That’s why all of the professional photographers have at least two cameras — one with a big lens and another with a smaller lens.

Having a big lens is a must for most of the shots. All the photographers had to stay behind a yellow dashed line that was about six feet from the sidlelines. Photo by Rob DeAngelo

Shooting with a digital camera makes a huge difference.

I remember the days of shooting with film. You didn’t know if you’d gotten the photo until the film was developed.

With digital cameras, you can see what you’ve got as soon as you shoot the photo and can make adjustments if needed. And you can keep on shooting.

I did have a point-and-shoot camera and my iPhone with me. I had thought that I could get some close-range photos if needed with the camera and could do a couple of Tweets. I did manage to do that but had real difficulty in seeing the screens in the bright sunlight on the sidelines.

5. The awareness of different roles of media professionals involved in covering the game

Once I cleared security before the game and had my NFL vest that photographers wear, Daron gave me a quick tour of the stadium, starting with the press box. When we arrived, very few of the media were there. Each station had a number, and a posted list indicated who was to sit at each location. I noted a name that wouldn’t have been on the list not too long ago – Yahoo! Sports. The journalists in the press box could be on the field but only after the game

After the game, reporters were on the field to interview players. Reporters may be responsible for shooting video, recording audio and conducting the interviews. Photo by Julie Dodd

When he’s not shooting on the field, Daron works in one of the photographers’ workrooms, sharing the space with photographers from the Associated Press and the Jacksonville Times Union.

Before the game, everyone was setting up their laptops and checking the Internet connection for transmitting their photos.

For many of the Jaguar games, Daron shoots for Reuters news service in addition to shooting for The St. Augustine Record and is sending photos to the Reuters sports desk in Singapore several times during the game.

After the game was over, the television crews joined the photographers and the reporters on the field.

6. Recognition of the role of public relations in a NFL game for journalists and for fans

Elementary school students were recognized for being part of a fitness program. This was just one of more than a dozen public relations activities during the game. Photo by Julie Dodd

The public relations staff played a big role for the media.

Before the game, we received a large card with the names, numbers and positions of the players for both teams along with information about their seasons and the coaching staff.

At halftime, one of the public relations staff came by our workroom and distributed a handout of the game so far – each play, the time of the play, and the players involved. That information was very helpful for writing accurate captions.

Out in the stadium, the public relations staff coordinated more than a dozen activities during timeouts. Honor students were recognized. Elementary students in a fitness program were introduced on the field. A veteran retiring after 26 years of service was recognized. Outback Steakhouse T-shirts were shot into the crowd as a promotional.

7. The opportunity of learning from a former student

The Jaguars and the Lions weren’t the only ones with a coach. I had a great coach in Daron Dean as I photographed my first NFL game. Photo by Julie Dodd

After the game, Daron and I talked about my experience. I have always admired sports photographers and their ability to capture the emotion and often “the moment” of a sporting event. I did even more so now.

I admire how Daron can be at the stadium today getting great football photos and could be at the scene of an accident tomorrow getting that photo and at a parade next weekend. Each of those situations requires different photo strategies.

I appreciate Daron letting me join him to on the sidelines – but just as much for the learning process for me both before, during and after the game.

← My photography on display at Satchel’s Pizza
Prepare and Vote →