One of the many delights of visiting Barcelona was daily walking.

In El Born, the old section of Barcelona where I was staying, the streets between the old stone buildings are more like alleyways, just wide enough for a car to pass through. 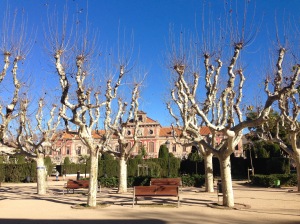 The Parliament of Catalonia is located in Parc de la Ciutadella, with London plane trees lining walkways. Signs marked a 5K route for walkers and runners.

The small streetcleaning truck did drive through the alleyways at night, and a few vans and small trucks made deliveries to stores. But otherwise, those who were walking dominated the alleyways, along with a few cyclists and motorcyclists.

Getting 10,000 daily steps was easy. We walked to the Placa St. Josep Oriol to view the artists’ work. We walked to La Boqueria, with its booths of fresh fruit, seafood, spices, chocolates and Iberian ham. We walked on the sidewalk beside the Mediterranean Sea.

We walked to the cafés and shops in the neighborhood.

We walked to the Metro to catch the subway to Park Guell (a planned community created by artist Antoni Gaudi). We walked to the Muses National d’ Art de Catalunya, where we were able to walk the perimeter of the roof and have a panoramic view of the city. (My previous visit to the museum was when I ran the Salomon Run that started by running up the long stairway from Parc de Montjuic to the museum.)

When we walked along La Rambla, we enjoyed to beauty of the London plane trees that lined the plaza and reminded us of the American sweetgum tree. We remembered those who had died or been injured in the terrorist’s attack on La Rambla last August.

Barcelona is a city of so much creative energy. Artwork in not just confined to the many museums of art in the city but is part of each community’s architecture and street design.

Each neighborhood of El Born had it own design of Christmas lighting decorating the streets. Not only was that a creative addition but was helpful when navigating through El Born.

The tiles used for paving many of the sidewalks and streets add to the feeling of creativity.

One of the tile patterns – The Rose of Barcelona – caught my attention first. Not only is the design used for paving sidewalks but is a design element for clothing and leather items (see photo of the Calpa store window). But the Rose isn’t the only tile design.

I learned that paving tiles became a part of Barcelona’s city design at the turn of the 20th century, as the city wall was removed and a master plan was developed and implemented to modernize the city. The new city design included neighborhoods with parks and paved roadways instead of the dirt roads.

The iconic Rose design was created by Modernista architect Puig i Cadafalch in 1900. The design was engraved on small stones that he used to pave a carriage entryway for a house he designed. The Rose-engraved stones inspired the designers who created Barcelona’s roadways, with paving starting in 1916.

Other designs were used, too, for sidewalks and roads, including a multi-tile design created by artist Antoni Gaudi.

Gaudi’s tile design requires seven hexagonal tiles to create the complete design. (You can read more about the fascinating history of the tiles and the social media initiative started by graduate students at the University of Barcelona to replace missing or damaged Gaudi tiles.)

Of course, an advantage of walking is that you’re going at a pace where you can see and enjoy the details that you would miss when riding in a car or bus.

← Opt Outside (#OptOutside) as often as you can to improve your health & outlook
Montserrat offers views, architecture and spiritual boost →