This is Alum Cave where I asked a hiker not to throw his banana peel into the woods.

A recent trip to the Great Smoky Mountains National Park was a wonderful time of hiking and enjoying nature. I first started hiking in the Smokies with my parents and had my first camping experiences and backpacking trip with my Girl Scout troop.

My time on the trails and in the Sugarlands Visitor Center on this trip was a reminder that many of those I saw on the trails were first-time hikers. These visitors were enthusiastic about being in such a beautiful setting and eager to explore, but they were limited in their knowledge about hiking.

The Sugarlands Visitor Center is one of the locations visitors learn about the Great Smoky Mountains National Park. More than 11.4 million people visited the park in 2018.

The visitor center has a wall display and brochure to help visitors identify hikes that could be done in one to two hours.

Visitors examined the display, picked up the brochure or talked with the staff at the information counter, and then got in their cars and drove to a trailhead to start their adventure.

My hope would be that everyone who makes the effort to do a hike in the Great Smoky Mountains National Park – or other National Park – will have a good experience that will make them want to hike again.

Let me offer a few tips for having a successful hiking experience and for following National Park rules.

Hiking the Alum Cave Trail to Mt. Le Conte, I was reminded of how many people don’t carry adequate water for a hike.

The streams and rivers in the Great Smoky Mountains National Park usually are clear and sparkling. But the water can contain Giardia, a microscopic parasite that causes intestinal problems. So all water in GSMNP should be treated before drinking.

Even short hikes can make you need to drink, especially on hot days.

I saw many groups on the trail arrive with two small bottles of water for the group of four or five people. Some individual hikers and groups were hiking with no water.

About three miles up the Alum Cave Trail, I heard a father tell his daughter, who was flushed and saying she was very thirsty, that they would find water to drink along the trail.

But the streams that sometimes run along the trail were dried up. Even if there was water in streams, drinking that untreated water can lead to health problems.

As we hiked down from Mt. Le Conte, three women who were hiking up stopped us to describe the men in their hiking group and ask if we had seen them. The men were carrying all the water — and these women were very thirsty.

Cellphone coverage is very limited in the Great Smoky Mountains National Park (as is true in other national parks), so you can’t call your friends on the trail and ask them to help you.

Leaving trash along the trail detracts from the nature experience for everyone else. If you leave wrappers from granola bars or your apple core, those will attract insects and animals.

Alum Cave Bluff is a popular location for hikers to stop for a break. We saw a man about to throw banana peels into the woods. We called to him to not thrown the banana peels. 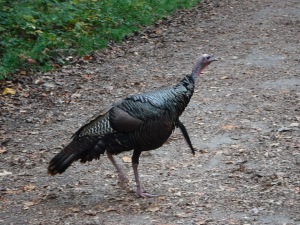 When you have the opportunity to observe wildlife, don’t get too close and don’t feed the animals. I took this photo with a telephoto lens.

Seeing turkeys, deer, elk or bears in their natural setting is exciting – but can be dangerous for you or for the wildlife.

Many people are so used to managed wildlife settings – like a zoo or a theme park – that they forget that these are wild animals. Feeding the animals can make them sick or dependent on people for food.

Not cleaning up your campsite or picnic spot could lead to bears coming to the area to eat and then returning to those locations for food.

The bears that have been fed by people can become a nuisance or become aggressive around people. Those bears are trapped and relocated by the Park Service. Bears with persistent aggressive behavior have to be euthanized.

For hikers and other tourists to the Smokies, using food to attract wildlife can provide an exciting memory of the trip – and perhaps a photo to post on social media. But after the tourists are gone, the animals’ lives may be forever changed.

In the Great Smoky Mountains National Park, only two trails allow pets – the Gatlinburg Trail and the Oconoluftee River Trail.

Dogs can carry diseases that could affect the native wildlife, and dogs can chase or scare animals. According to the GSMNP, smelling a dog can cause small animals to hide all day and not eat as they should.

The dogs, too, could have problems – becoming prey for large predators or encountering insects or thorns.

Drones are prohibited in all National Parks. The drones can be disturbing to wildlife, such as birds, and distracting to people enjoying the parks.

On two different hikes in the GSMNP, we encountered young men flying drones.

The first time was on the Alum Cave Trail. We and others who were hiking near us thought the sound was a huge swarm of bees. We all were hurrying down a somewhat steep section of the trail to get away from the area.

But then we saw a group of young men who were landing a drone. We stopped to talk with them and explained that drones were illegal in National Parks. They said they didn’t know that and packed the drone into a special backpack.

Two days later, we encountered another young man flying a drone near the Clingmans Dome Tower. We talked with him, and he landed the drone and packed it.

Of course I don’t know if the drone owners flew their drones again in the Park. But I hope that talking with them about why drones are disruptive to wildlife — and that flying a drone can lead to a fine — encouraged them not to fly their drones in the Park.

Some beautiful areas in National Parks can have dangers. 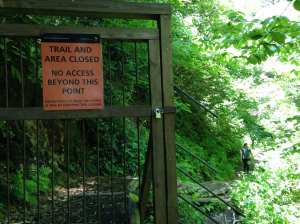 This gate across Chimney Top Trail didn’t stop hikers from climbing around the gate and continuing on the closed portion of the trail.

The very top of the Chimney Tops Trail is closed because of the damage to the area caused by the Gatlinburg Wildfires of November 2016.

A locked gate has been installed across the trail with metal rods extending from the gate to keep hikers from climbing around the gate.

But the gate and sign did not discourage more than a dozen hikers that I saw on the day I hiked the trail.

The GSMNP Technical Rescue Team used ropes and pulleys to lift a hiker who fell 40 feet at Laurel Falls and then carry her to the trailhead. A sign at the falls warns of the danger of leaving the trail to get too close to the falls.

Just two days before, I had talked with the assistant manager at LeConte Lodge, who is a first responder for accidents.

She showed me the 50-pound medical stretcher that must be carried to the accident location and then is used to transport the accident victim, often on narrow and steep trails.

She talked about the difficulty of rescue work and the cost to the Park Service and to the accident victim.

The rangers can’t be everywhere in the park to talk with hikers, especially in these times of budget cuts for the National Park Service.

So those of us who are experienced hikers and want others to enjoy hiking and preserve our parks can take the initiative — if the situation arises —  to talk with folks who seem new to hiking and unfamiliar with Park rules and strategies for successful hiking.