3 kinds of job interviews to be prepared for

At a job fair, interviewing with a screener is a first step. Photos by Julie Dodd

A key part of getting a job is being successful in interviews.

Often we envision the interview as being one-on-one with the person making the hiring decision. And that is how some interviews work.

However, you need to be prepared for several other kinds of interview.

1. Being interviewed by a screener

This kind of interview is very typical of job fairs. When a company is going to interview at a job fair, several people may be on site to do initial five- to ten-minute interviews with prospective employees.

The interviews are screening a large number of candidates to identify a much smaller group of candidates who will be contacted for a call-back interview. That second interview could happen the next day or at a later date.

Your goal in a screening interview is to be one of the candidates selected for that next-round interview. When I talked with interviewers at the University of Florida’s Career Showcase, they said that a candidate has about 30 seconds to make an impression. 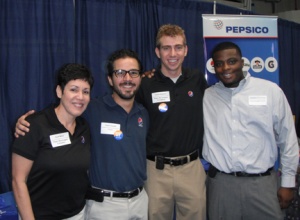 This was part of the interviewing team from Pepsico at the UF Career Showcase. They stressed how important it is to know something about the company you are interviewing with.

Have energy. Have a good handshake. Make eye contact. Have a resume that is easy to scan. Know something about the company.

2. Being interviewed by several people at the same time

If you are interviewing at this level, that means you have fulfilled the basic requirements for the job. What you are trying to do in this group interview is convey that you can become a good member of the team.

Be ready to talk about how you work in a group, what your work style is, what you can bring to a group. You must be able to go beyond generalizations. Be ready to share specific situations to illustrate your abilities. You also need to have a story to share – if asked – about how you dealt with a job disappointment or failure.

3. Being interviewed by a rotation of different people

The company’s goal is to have people with a number of perspectives have the opportunity to talk with you and evaluate you from their different perspectives.

Don’t dismiss anyone you talk with as not important to the job process – even the receptionist or the intern who may be taking you from one meeting to another.

Be prepared to be going full speed throughout the process. Wear an outfit and shoes that will be comfortable and stay professional looking. You may want to have a water bottle and energy bar in your briefcase or purse.  Avoid getting distracted by checking your phone or laptop between interviews, unless you have a clear work-related issue or personal necessity to deal with.

With each different interview setting, determine what information to share. You may be telling several aspects about yourself in every meeting. But every interview should have distinctive differences.